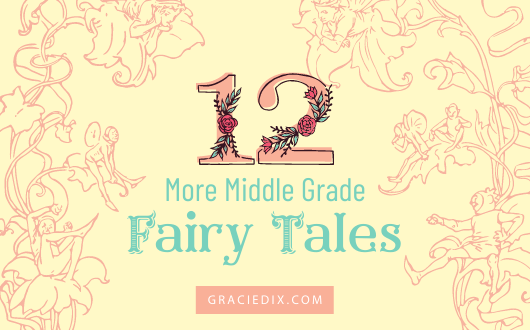 You can never have too many fairy tales, am I right? They just never get old. Especially when there are so many different ways to look at familiar stories.

For this post, I put together another dozen fairy tales to add to your TBR list. Some are modern stories, some are ancient tales from other countries, and some are the kind of good old-fashioned fairy stories we all know and love. I hope you’ll find something you haven’t read yet—but want to.

What do you think:  Would you rather be a fairy or an elf? Or maybe a troll or a dragon? A princess or a warrior…or both at the same time? Let’s talk about it over on my Instagram page.

If you missed the first batch of fairy tale fun, check out 15 Fairy Tales for Middle Grade Readers.

Haven’t you always wanted to meet a fairy? Be careful what you wish for! I think it’s safe to say that Sarah Jane’s experience with fairies didn’t exactly go the way she planned…

Amazon description:  Sarah Jane has always wanted to meet a fairy, but she has no idea that the tiny wounded man she discovers in the Tanglewood Forest is about to ensnare her in a longtime war between rival magical clans. When her six sisters are kidnapped and split up by the opposing sides, she’ll need the help of several friends—from the reclusive Aunt Lillian to the mysterious Apple Tree Man—to bring them home. But if they don’t untangle themselves from the feud quickly, they could all be trapped in the fairy world forever.

2. Where The Mountain Meets The Moon by Grace Lin

An inspiring story about a curious girl who isn’t willing to give up on a better life. Also: dragons, monkeys, kings, buffalo boys, lucky twins and green tigers. So there’s that.

Amazon description:  In the valley of Fruitless mountain, a young girl named Minli lives in a ramshackle hut with her parents. In the evenings, her father regales her with old folktales of the Jade Dragon and the Old Man on the Moon, who knows the answers to all of life’s questions. Inspired by these stories, Minli sets off on an extraordinary journey to find the Old Man on the Moon to ask him how she can change her family’s fortune. She encounters an assorted cast of characters and magical creatures along the way, including a dragon who accompanies her on her quest for the ultimate answer.

3. Hereville:  How Mirka Got Her Sword by Barry Deutsch

This book may have the best subtitle ever:  Yet Another Troll-Fighting 11-Year-Old Orthodox Jewish Girl. You’ve got to love a girl whose goal in life is to fight dragons.

Amazon description:  Spunky, strong-willed eleven-year-old Mirka Herschberg isn’t interested in knitting lessons from her stepmother, or how-to-find-a-husband advice from her sister, or you-better-not warnings from her brother. There’s only one thing she does want: to fight dragons! Granted, no dragons have been breathing fire around Hereville, the Orthodox Jewish community where Mirka lives, but that doesn’t stop the plucky girl from honing her skills. She fearlessly stands up to local bullies. She battles a very large, very menacing pig. And she boldly accepts a challenge from a mysterious witch, a challenge that could bring Mirka her heart’s desire: a dragon-slaying sword! All she has to do is find—and outwit—the giant troll who’s got it!

4. The Ickabog by J.K. Rowling

A fairy tale by the author of Harry Potter! This is a fun story about the power of hope and friendship.

Amazon description:  The kingdom of Cornucopia was once the happiest in the world. It had plenty of gold, a king with the finest moustaches you could possibly imagine, and butchers, bakers and cheesemongers whose exquisite foods made a person dance with delight when they ate them.

Everything was perfect – except for the misty Marshlands to the north which, according to legend, were home to the monstrous Ickabog. Anyone sensible knew that the Ickabog was just a myth, to scare children into behaving. But the funny thing about myths is that sometimes they take on a life of their own. Could a myth unseat a beloved king? Could a myth bring a once happy country to its knees? Could a myth thrust two children into an adventure they didn’t ask for and never expected? If you’re feeling brave, step into the pages of this book to find out…

5. The Flight of Swans by Sarah McGuire

One brave princess has to save her brothers and her kingdom—without saying a word! Based on the Grimm’s fairy tale Six Swans.

Amazon description:  Princess Andaryn’s six older brothers have always been her protectors―until her father takes a new Queen, a frightening, mysterious woman who enchants the men in the royal family. When Ryn’s attempt to break the enchantment fails, she makes a bargain: the Queen will spare her brothers’ lives if Ryn remains silent for six years.

6. Ophelia and the Marvelous Boy by Karen Foxlee

A modern-day fairytale set in a museum! This is a story about friendship, courage, love, and not giving up.

Amazon description:  This is the story of unlikely heroine Ophelia Jane Worthington-Whittard who doesn’t believe in anything that can’t be proven by science. She and her sister Alice are still grieving for their dead mother when their father takes a job in a strange museum in a city where it always snows. On her very first day in the museum Ophelia discovers a boy locked away in a long-forgotten room.  He is a prisoner of Her Majesty, the Snow Queen.  And he has been waiting for Ophelia’s help.

As Ophelia embarks on an incredible journey to rescue the boy everything that she believes will be tested. Along the way she learns more and more about the boy’s own remarkable journey to reach her and save the world.

7. The Wishing Spell (The Land of Stories, 1) by Chris Colfer

What if you suddenly found yourself in a fairy tale world? You’d need a mysterious journal to guide you out.

Amazon description:  The Land of Stories tells the tale of twins Alex and Conner. Through the mysterious powers of a cherished book of stories, they leave their world behind and find themselves in a foreign land full of wonder and magic where they come face-to-face with fairy tale characters they grew up reading about. But after a series of encounters with witches, wolves, goblins, and trolls alike, getting back home is going to be harder than they thought.

8. Unlocking the Spell: A Tale of the Wide-Awake Princess by E. D Baker

This series is so much fun! I love how it takes a familiar story and makes you look at it in a different way.

Amazon description:  Now that Annie has helped her sister Gwendolyn (a.k.a. Sleeping Beauty) wake up from the 100-year curse by finding her beloved prince, you would think that things would get back to normal. Think again! That beloved prince, Beldegard, is stuck in the body of a bear and the only way that Annie can be free of the two irritating lovebirds is to help-by finding the evil dwarf who cast the spell. Luckily, Annie has assistance from handsome prince Liam, and she has many tricks up her non-magical sleeve . . .

I’m not a twin, but I think it would be so much fun to be able to fool people the way Flissa and Sara do. If you like this story, don’t miss the sequel, UnTwisted.

Amazon description:  Princesses Flissa and Sara are even closer than most twins. In fact, most of the kingdom thinks they’re the same person.

When magic was outlawed in Kaloon generations ago, twins, black cats, and other potentially-magical beings were outlawed, too. Since they were born, Flissa and Sara have pretended to be one princess, Flissara, trading off royal duties like attending glamorous balls, participating in fencing exhibitions, and making friends with other young nobles, all while hiding in plain sight.

But when the first magical attack in years puts their mother’s life in danger, the girls must break the rules that have protected them to save her. Enlisting a brave servant boy and his plucky black kitten as their guides, they set off on an epic quest to the Twists—a forbidden place full of dark magic—to find the evil mage who cursed the queen. With a case of mistaken identity, a wickedly powerful exile out for vengeance, and time running out for their mother, the twins might just need to make their own magic to save the day.

Books with strong female characters are my favorites! Masha is smart and tough—and she’ll need to be to get out of this place alive.

Amazon description:  Most children think twice before braving a haunted wood filled with terrifying beasties to match wits with a witch, but not Masha. Her beloved grandma taught her many things: that stories are useful, that magic is fickle, that nothing is too difficult or too dirty to clean. The fearsome witch of folklore needs an assistant, and Masha needs an adventure. She may be clever enough to enter Baba Yaga’s house-on-chicken-legs, but within its walls, deceit is the rule. To earn her place, Masha must pass a series of tests, outfox a territorial bear, and make dinner for her host. No easy task, with children on the menu!

Have you ever had a friend who stopped being your friend? Then you’ll understand what Hazel is going through…

Amazon description:  Once upon a time, Hazel and Jack were best friends. But that was before he stopped talking to her and disappeared into a forest with a mysterious woman made of ice. Now it’s up to Hazel to go in after him. Inspired by Hans Christian Andersen’s “The Snow Queen,” Breadcrumbs is a stunningly original fairy tale of modern-day America, a dazzling ode to the power of fantasy, and a heartbreaking meditation on how growing up is as much a choice as it is something that happens to us.

Can you imagine turning in your homework to the Big Bad Wolf? What a fun take on familiar characters!

Amazon description:  Gilly wouldn’t call herself wicked, exactly. But when you have five little brothers and sisters and live in a run-down boot, you have to get creative to make ends meet. Gilly’s a pretty good thief (if she does say so herself). Until she gets caught. Gilly’s sentenced to three months at Fairy Tale Reform School where all of the teachers are former (super-scary) villains like the Big Bad Wolf, the Evil Queen, and Cinderella’s Wicked Stepmother. Harsh. But when she meets fellow students Jax and Kayla, she learns there’s more to this school than its heroic mission. There’s a battle brewing and Gilly has to wonder…just how good these bad guys really are?

For more fairy tale fun, see 15 Fairy Tales for Middle Grade Readers and be sure to stop by my Instagram page to let me know what kind of fairy tale character you’d most like to be.