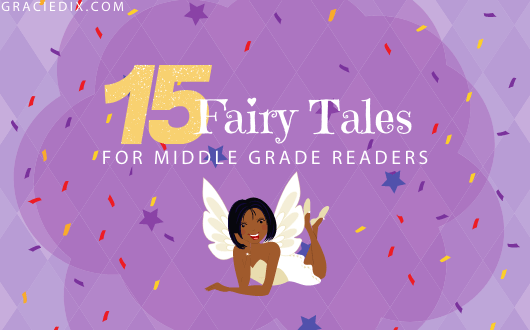 What exactly is a fairy tale anyway? Does there have to be an actual fairy in the story to make it an official fairy tale? You don’t have to wonder: I looked it up. According to an online dictionary, a fairy tale is “a story in which improbable events lead to a happy ending.” (You’re welcome.)

Who doesn’t like that kind of story? I know I do. Especially when somebody puts the story in a new time or place, or tells it through the eyes of a different character.

You’ll probably recognize some of these stories as retellings of classic fairy tales, but some of them are new. They were new to me, anyway. Some of them even have characters who are fairies. Do they all have happy endings?  What do you think?

What’s your favorite fairy tale? Stop by my Instagram page and vote for your fave.

FYI: the book descriptions below are from Amazon.

1.  Rump: The (Fairly) True Tale of Rumpelstiltskin by Liesl Shurtliff

In a magic kingdom where your name is your destiny, 12-year-old Rump is the butt of everyone’s joke. But when he finds an old spinning wheel, his luck seems to change. Rump discovers he has a gift for spinning straw into gold. His best friend, Red Riding Hood, warns him that magic is dangerous, and she’s right. With each thread he spins, he weaves himself deeper into a curse.

To break the spell, Rump must go on a perilous quest, fighting off pixies, trolls, poison apples, and a wickedly foolish queen. The odds are against him, but with courage and friendship—and a cheeky sense of humor—he just might triumph in the end.

Autumn Primrose is no ordinary fairy—but she never expected she’d be called on to save the Fairy Realm from its former evil queen. The evil Azara killed Autumn’s parents before being overthrown and put in prison. Now she’s out for revenge. Tiny Autumn struggles to transform herself from a healer to a warrior, gathering an unlikely band of companions—a shy hedgehog, an elegant dragon fly, a deadly elf warrior, and an Armada of Sea Elves—along the way. Will Autumn meet the same fate as her parents? Or will she and her companions save the fairy folk and their world?

It’s a familiar story: In spite of the obstacles put in her way by her wicked stepmother, Ella goes to the ball, sweeps Prince Charming off his feet, and is chosen to be his bride. Now she’s comfortably ensconced in the palace, awaiting marriage to the man of her dreams. It’s happily ever after time, right?

Wrong! Life for Ella has become an endless round of lessons and restrictions; even worse, Prince Charming turns out to be more like Prince Boring. Slowly, Ella comes to realize she doesn’t want the life she fought so hard to win. But breaking her engagement proves more difficult— and dangerous—than escaping her stepmother’s tyranny.

For years, Briony has lived in the shadow of her beautiful older sister, Rosalin, and the curse that has haunted her from birth—that on the day of her sixteenth birthday she would prick her finger on a spindle and cause everyone in the castle to fall into a 100-year sleep. When the day the curse is set to fall over the kingdom finally arrives, nothing—not even Briony—can stop its evil magic.

You know the story.

But here’s something you don’t know. When Briony finally wakes up, it’s up to her to find out what’s really going on, and to save her family and friends from the murderous Thornwood. But who is going to listen to her? This is a story of sisterhood, of friendship, and of the ability of even little sisters to forge their own destiny.

Princess Emeralda a.k.a. Emma, isn’t exactly an ideal princess. Her laugh is more like a donkey’s bray than tinkling bells, she trips over her own feet and she does not like Prince Jorge, whom her mother hopes she will marry. But if Emma ever thought to escape her troubles, she never expected it to happen by turning into a frog!

When convinced to kiss a frog so he might return to being a prince, somehow the spell is reversed and Emma turns into a frog herself! Thus begins their adventure—a quest to return to human form.

Jack might be the only kid in the world who’s dreading summer. But he’s got a good reason: summer is when his single mom takes a second job and leaves him at home to watch his autistic kid sister, Maddy. It’s a lot of responsibility, and it’s boring, too, because Maddy doesn’t talk. Ever. But then, one day at the flea market, Maddy does talk―to tell Jack to trade their mom’s car for a box of mysterious seeds. It’s the best mistake Jack has ever made.

What starts as a normal little garden out back behind the house quickly grows up into a wild, magical jungle with tiny onion babies running amok, huge, pink pumpkins that bite, and, on one moonlit night that changes everything…a dragon.

“So I ate some porridge and broke a chair—get over it!” Goldilocks, an overdramatic tween who has deluded herself into believing she’s a princess, is stranded at Three Bears Cottage until the Big Bad Wolf leaves the area. Add in a hungry troll, three pigs with a home improvement show on HoGTV, and of course the Big Bad Wolf, and you end up with a hilarious mash-up of folk and fairy tales from around the world.

Goldilocks and Baby Bear (who now calls himself Bobby Bear) take turns narrating the hilarious story of their hair-raising adventures and how they end up as (sort of) friends. As Bobby explains, “I mean, annoying as she was, I didn’t want her to end up wolf kibble.”

8. The Hero’s Guide to Saving Your Kingdom by Christopher Healy

Prince Liam. Prince Frederic. Prince Duncan. Prince Gustav. You’ve never heard of them, have you? These are the princes who saved Sleeping Beauty, Cinderella, Snow White, and Rapunzel, respectively, and yet, thanks to those lousy bards who wrote the tales, you likely know them only as Prince Charming. But all of this is about to change.

Rejected by their princesses and cast out of their castles, the princes stumble upon an evil plot that could endanger each of their kingdoms. Now it’s up to them to triumph over their various shortcomings, take on trolls, bandits, dragons, witches, and other assorted terrors, and become the heroes no one ever thought they could be.

9. Grounded: The Adventures of Rapunzel by Megan Morrison

In all of Tyme, from the Redlands to the Grey, no one is as lucky as Rapunzel. And she knows this because Witch tells her so—her beloved Witch, who protects her from evil princes, the dangerous ground under the tower, even unhappy thoughts. Then a thief named Jack climbs into her room to steal one of her enchanted roses. He’s the first person Rapunzel’s ever met who isn’t completely charmed by her (well, the first person she’s met at all, really), and he is infuriating—especially when he hints that Witch isn’t telling her the whole truth.

Rapunzel descends to the ground for the first time, and finds a world filled with more peril than Witch promised…and more beauty, wonder, and adventure than she could have dreamed.

At her birth, Ella of Frell receives a foolish fairy’s gift—the “gift” of obedience. Ella must obey any order, whether it’s to hop on one foot for a day and a half, or to chop off her own head! But strong-willed Ella does not accept her fate…

Against a bold backdrop of princes, ogres, giants, wicked stepsisters, and fairy godmothers, Ella goes on a quest to break the curse forever.

Snow and Rose didn’t know they were in a fairy tale. People never do. . . .

Once, they lived in a big house with spectacular gardens and an army of servants. Once, they had a father and mother who loved them more than the sun and moon.

This is the story of two sisters and the enchanted woods that have been waiting for them to break a set of terrible spells.

12. The Goose Girl by Shannon Hale

Anidori-Kiladra Talianna Isilee, Crown Princess of Kildenree, spends the first years of her life listening to her aunt’s stories and learning the language of the birds, especially the swans. As she grows up, Ani develops the skills of animal speech, but she never feels quite comfortable speaking with people.

So when Ani’s mother sends her away to be married in a foreign land, she finds herself at the mercy of her silver-tongued lady in waiting, who leads a mutiny that leaves her alone, destitute, and fleeing for her life. To survive, Ani takes on work as a royal goose girl, hiding in plain sight while she develops her forbidden talents and works to discover her own true, powerful voice.

Twelve-year-old John Fischer Jr., “Little John” as he’s always been known, is spending the hot Texas summer helping his father to clear trees for Mr. King, the richest and most powerful man in town. Then one day he hears a song through the brush, one so beautiful that it stops him in his tracks. He follows the melody and finds, not a bird, but a young girl sitting in the branches of a tall sycamore tree. There’s something magical about this girl, Gayle, especially her soaring singing voice.

Little John’s home is full of sorrow over his sister’s death and endless stress over money troubles. But his friendship with Gayle quickly becomes the one bright spot in tough times . . . until Mr. King forces Little John into an impossible choice: risk his family’s survival, or put Gayle’s future in danger.

14.  The Princess and The Goblin by George Macdonald

Princess Irene lives in a castle in a wild and lonely mountainous region. One day she discovers a steep and winding stairway leading to a bewildering labyrinth of unused passages with closed doors — and a further stairway.

What lies at the top? Can the ring the princess is given protect her against the lurking menace of the boglins from under the mountain?

Harriet Hamsterbone is not your typical princess. She may be quite stunning in the rodent realm (you’ll have to trust her on this one), but she is not so great at trailing around the palace looking ethereal or sighing a lot. She finds the royal life rather . . . dull. One day, though, Harriet’s parents tell her of the curse that a rat placed on her at birth, dooming her to prick her finger on a hamster wheel when she’s twelve and fall into a deep sleep. For Harriet, this is most wonderful news: It means she’s invincible until she’s twelve! After all, no good curse goes to waste. And so begins a grand life of adventure with her trusty riding quail, Mumfrey…until her twelfth birthday arrives and the curse manifests in a most unexpected way.

What fairy tale character would you like to be? A princess or prince, a fairy, a witch, or something else? Visit my Instagram page and let me know. And if you have a picture, share that, too! I’d love to see your fairy tale self.