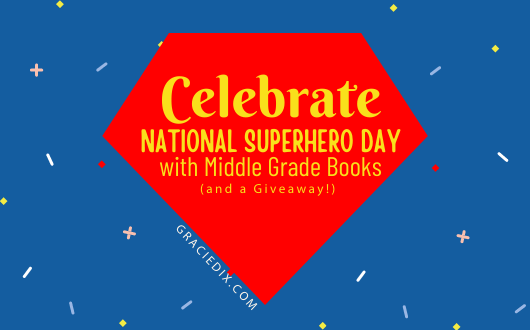 Superheroes, unite! Is your costume clean? Have you polished your super tools?  Made plans with your sidekick? Because it’s time…

How are you going to celebrate? How about using one of your superpowers—reading. When you think about it, being able to read is pretty amazing. Looking at marks on a page can open the door to a whole new world in your imagination. How awesome is that?

Since it’s National Superhero Day, it only makes sense to read about superheroes, right? So here’s a list of superhero books for you. A bunch them are brand-new while a couple have been around for a few years, but I think you’ll enjoy all of them.

P.S. I bet reading is not your only superpower. Take my What’s Your Superpower Quiz and find out!

What if there was a superhero with the power to reverse global warming? Now there is: her name is EcoQueen. Actually, her name is Kora. With help from her autistic twin brother, Río, Kora learns to control her gifts and sets out on a mission to protect people and ecosystems threatened by rising sea levels, catastrophic weather events, long-lasting droughts, and blazing wildfires across the globe. As if that’s not enough to keep a budding superhero busy, Kora must also solve the mystery of the miraculous sacred seeds—which may just hold the secret to stopping global warming once and for all.

There are humans and then there are Elementalists, a species capable of controlling and wielding elements such as light, fire, and water. Minisc’s dad is the Hero of Light, the most famous Elementalist in history. So, no pressure to live up to his father’s legacy, then. Minisc has never wanted to be like his dad. Instead, he wants to make his mother’s dying wish come true: unity and peace between humans and Elementalists. But when Minisc heads to Elemental Academy to hone his ability, he uncovers a threat to that that peace. Together with his friends Lily and Jules, Minisc must grow into his power and become the hero he has long shunned—or both humans and Elementalists may be doomed.

3. Journey to Superhero School, An Oliver & Jessica Prequel to The Vork Chronicles by Gracie Dix

Imagine four-year-old twins…with superpowers! Once their family realizes little Jessica and Oliver Fletcher have powers, their lives will never be the same. This prequel to Welcome to Superhero School follows little Jess and Oliver as they try to hide their powers at school, battle living room décor, and so much more. Our young heroes through it all with family support, love for each other, and their own unique brand of sibling sarcasm.

This action-packed journey of friendship, hardship, and humor follows Oliver, Jess, and their friends on a mission to destroy the power-hungry, evil villains of Vork. The kids have Powers—Flight, Morphing, Invisibility, Mind Reading, and more—but will that be enough for them to overcome Vork? The heroes will be pushed to their limits as they face everything from dinosaurs to dragons, but the hardest thing to overcome may be their own doubts and painful pasts.

Why should superheroes get all the credit? High schooler Sawyer William Vincent—yes, it does sound like three first names—is the Red Raptor, “partner” (not sidekick!) to the legendary Black Harrier. Even if nobody knows Sawyer’s (sorry, Red Raptor’s) name. He works with the Black Harrier to bring down the city’s most dangerous villains—until the Black Harrier gets a mysterious note and disappears. Now Saw…the Red Raptor is on his own. But it’ll be fine. He’s got this. Piece of cake. Right?

As if high school wasn’t tough enough, Adam comes home to find his house swarming with government agents. Turns out his dad was a secret government scientist who got caught performing illegal experiments—including genetically modifying Adam’s DNA! Now Adam’s dad is missing and all that genetic messing around is starting to take effect. Adam has to find a traitor within the agency, help the agency find his father, and hope that his father can find a cure—before it’s too late.

If you’ve ever wanted to spy on someone else’s conversation—especially if those ‘someones’ are a superhero and a supervillain—this book is for you. It’s told entirely through texts, transcriptions, and direct messages. Here’s what they’re talking about: Up-and-coming teen superhero Cortex is on top of the world—at least, until his villain dumps him. Meanwhile, the villainous Vortex needs to find a steady relationship with an enemy she won’t kill in the first round. Enter Meta-Match, a nemesis pairing site for heroes and villains, where they match right away. But not everything in the superhero world is as it seems. Who are the real heroes and villains? When darkness from the past threatens them both, Cortex and V may need to work together to make it out alive.

8. The Time I Saved the Day (The Ninja and Hunter Series) (Volume 1) by Jes Drew

High school sophomore, Charisa O’Dell, has enough to do between homework, karate, and an upcoming school dance. However, when she is accidentally endowed with superhuman powers, she adds one more thing to the list: crime fighting. Crime is a lot more complicated than her comics make it seem, and she finds herself relying on the mysterious Villain Hunter, who somehow shares several of her superhuman powers. Even so, the more she infiltrates the world of crime, the more she attracts the attention of the criminals. Will she survive her attempt to save the day? (Amazon description)

What’s a superhero to do when there are no supervillains left to fight? Now that the Crawlers have gone, Johnny Q has taken to chasing common criminals. Under his protection, the city of Midhaven is safe. Sort of. That’s where Kleiner comes in. Kleiner’s a student, hired by the city to follow Johnny around, by way of his clunky jet-back named Shania. Kleiner’s job is to keep Johnny from breaking stuff (when he can) and file the paperwork (when he can’t). But when the Crawlers come back, Johnny and Kleiner will have to work together to save their city.

10. The Super Twins by Andy Slinger

Why have one superhero when you can have two? Ryan and Jake are your typical mischievous teens. An earth-shattering event gives them abilities beyond their wildest dreams. While they focus on developing their powers, they fail to notice a dark force on the rise. A series of crimes has left the local police mystified. Only they can discover who is responsible. But when they find out the truth, they must make a choice that will change their lives forever… (Amazon description)

Fourteen-year-old Doreen Green just moved from sunny California to the suburbs of New Jersey. Now she has to face a new school and make new friends, and, of course, she has to hide her tail. That’s right, Doreen has the powers of a squirrel! Then one day Doreen uses her powers and becomes the talk of the school. Taking the obvious next step, Doreen becomes Squirrel Girl! She’s your friendly neighborhood superhero, until a real-life supervillain appears and declares Squirrel Girl his archenemy. Can Doreen balance being a teenager and a superhero? Or will she go . . . NUTS?

12. Cape (The League of Secret Heroes) by Kate Hannigan

Josie O’Malley’s dad is off fighting the Nazis. If only she could do more…like all the caped heroes that have disappeared. Since her only power is math smarts, maybe she can help cracking codes or something. But the officials don’t want girls. Josie and two other wannabe puzzlers bond over their shared love of celebrity female superheros. Then, one extraordinary afternoon, the trio finds themselves transformed into the town’s newest—and youngest—superheroes! They may be able to help stop Hitler after all. They might even find out what happened to all the missing superheroes.

At her old school, everyone in Cece’s class was deaf. Here, she’s different. She’s sure the kids are staring at the Phonic Ear, the powerful aid that will help her hear her teacher. Then Cece makes a startling discovery. With the Phonic Ear she can hear her teacher not just in the classroom but anywhere her teacher is in the school—in the hallway . . . in the teacher’s lounge . . . in the bathroom! This is power. Maybe even superpower! Cece is on her way to becoming El Deafo, Listener for All. But the funny thing about being a superhero is that it’s just another way of feeling different . . . and lonely. Can Cece channel her powers into finding the thing she wants most, a true friend?

14.  Superhero Princess and the Curse of the Rainbow Fairy by Natasha House

Zara is your typical fairy tale princess, blonde, gorgeous and awaiting her prince charming. Except for one thing, she’s been cursed with super powers. You’d think flying fast, being strong, and the ability to attract small, fuzzy creatures would be awesome right? Wrong! Join Zara as she fights mutant carrots, evil mermaids, and dragons with attitudes. Everything changes when a new boy named Gunner enrolls in her school. Suddenly, magical eggs from various monsters around the kingdom start to go missing. It’s up to Zara to discover who is stealing these monster eggs and why. (Amazon description)

15. How to Be a Supervillain by Michael Fry

I know what you’re thinking: we’re celebrating National SuperHERO Day, what’s this villain doing in here? But this one is just too much fun not to share. Part comic book, part novel, How to be a Supervillain is the story of Victor, a good kid with bad parents. Super-bad parents…as in supervillain bad. They want Victor to join the family business, but no matter how hard he tries, he just can’t bring himself to be bad. So his parents send Victor off to apprentice with a disgraced supervillain…and then things really get interesting.

There you have it: Fifteen books (plus sequels) to celebrate National Superhero Day. Hope you enjoy them! Don’t forget to head over to my Instagram page for the book giveaway!