Magical Schools for Back To School 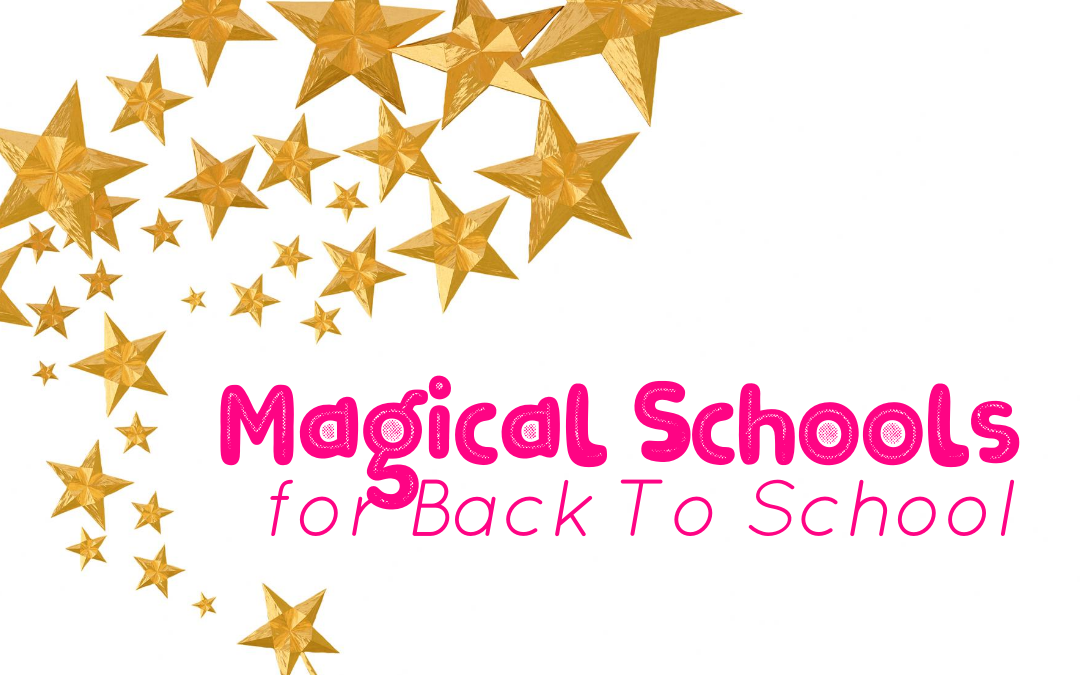 It’s back to school time! Get ready for new teachers, classes, and homework! Back to school may look a little different this year, with online classes and social distancing. So if you’re looking for a fantastical escape, open a book and open your mind to a magical new experience!

I’m sharing 10 of my favorite books and series that will transport you into the magical school of your dreams.

Which of these magical schools would you choose? Some of them sound pretty dangerous to me!

P.S. – Want even more books about schools? Hop over to 15 Middle Grade Novels for Back to School. Are you longing for more magical books? Check out The 20 Best Middle-Grade Books and Series With Dragons.

1. The School for Good and Evil by Soman Chainani

There’s really two schools here – the School for Good and the School for Evil. Which one will you be at? Are you sure? Bonus: This series is about to become a movie on Netflix!

Amazon description: With her glass slippers and devotion to good deeds, Sophie knows she’ll earn top marks at the School for Good and join the ranks of past students like Cinderella, Rapunzel, and Snow White. Meanwhile, Agatha, with her shapeless black frocks and wicked black cat, seems a natural fit for the villains in the School for Evil.

The two girls soon find their fortunes reversed—Sophie’s dumped in the School for Evil to take Uglification, Death Curses, and Henchmen Training, while Agatha finds herself in the School for Good, thrust among handsome princes and fair maidens for classes in Princess Etiquette and Animal Communication. But what if the mistake is actually the first clue to discovering who Sophie and Agatha really are?

Book 1 of 7 in the Spy School series

Spy School is one of my favorite series! Fair warning – it is very dangerous there! Think twice before you sign up!

Amazon description: Ben Ripley may only be in middle school, but he’s already pegged his dream job: C.I.A. or bust. Unfortunately for him, his personality doesn’t exactly scream “secret agent.” In fact, Ben is so awkward, he can barely get to school and back without a mishap. Because of his innate nerdiness, Ben is not surprised when he is recruited for a magnet school with a focus on science—but he’s entirely shocked to discover that the school is actually a front for a junior C.I.A. academy. Could the C.I.A. really want him?

Actually, no. There’s been a case of mistaken identity—but that doesn’t stop Ben from trying to morph into a supercool undercover agent, the kind that always gets the girl. And through a series of hilarious misadventures, Ben realizes he might actually be a halfway decent spy…if he can survive all the attempts being made on his life!

Book 1 of the Vork Chronicles

This school is filled with superheroes! But the school is pretty super itself, with some unexpected magical qualities. Like what? Perched atop a giant cloud in the sky, Superhero School is able to repair and rebuild itself!

Welcome to Superhero School! Join Oliver, Jess, and all their friends on a mission to destroy the power-hungry, evil villains of Vork. From subterranean sewers to lush jungle, from dinosaurs to dragons, our heroes will be pushed to their limits in ways they’d never imagined.

Will their collective Powers—Flight, Morphing, Invisibility, Mind Reading, and more—be enough for them to overcome the malevolence of Vork? Or will they stumble over their own doubts and painful histories This action-packed journey of friendship, hardship, and humor will take our heroes to thrilling new heights and a deeper understanding of their own place in the world. But will that be enough—or will Vork always be one step ahead?

Want to know how Oliver and Jessica ended up at Superhero School and learn more about the school? This is the book for you!

Amazon description: When twins Jessica and Oliver Fletcher discover their Super Powers at age 4, the family realizes their lives will never be the same again. Mr. and Mrs. Fletcher work hard to raise this dynamic pair, helping them try to fit in while learning to use their Powers to better themselves and the world around them. School is especially tricky for these students who must not reveal their Powers—until their mother receives a mysterious phone call in the middle of the night.

While Jessica and Oliver face a variety of challenges—from battling living-room décor, to daring rescues, to bungling doctors—they get through it all with family support, love for each other, and their own unique brand of sibling sarcasm. This is only the beginning of their adventures, so join the Fletcher twins on their Journey to Superhero School.

Book 1 of 3 in the Mrs. Smith’s Spy School for Girls series

After a botched escape plan from her boarding school, Abigail is stunned to discover the school is actually a cover for an elite spy ring called The Center, along with being training grounds for future spies. Even more shocking? Abigail’s mother is a top agent for The Center and she has gone MIA, with valuable information that many people would like to have—at any cost. Along with a former nemesis and charming boy from her grade, Abigail goes through a crash course in Spy Training 101, often with hilarious—and sometimes painful—results. But Abigail realizes she might be a better spy-in-training than she thought—and the answers to her mother’s whereabouts are a lot closer than she thinks…

Book 1 of 5 in the Magisterium series

Are you annoyed when you have to get up in the morning and you’re not ready for the sunlight? If so, this underground school might be the one for you!

Most kids would do anything to pass the Iron Trial. Not Callum Hunt. He wants to fail. All his life, Call has been warned by his father to stay away from magic. If he succeeds at the Iron Trial and is admitted into the Magisterium, he is sure it can only mean bad things for him. So he tries his best to do his worst – and fails at failing.

Now the Magisterium awaits him. It’s a place that’s both sensational and sinister, with dark ties to his past and a twisty path to his future. The Iron Trial is just the beginning, for the biggest test is still to come.

7. Percy Jackson and the Olympians by Rick Riordan

Book 1 of 5 in the Percy Jackson Series

Yes, they call it Camp. However, Camp Half-Blood has a lot of classes going on – it is the ultimate school for demigods!

Amazon description: Percy Jackson is a good kid, but he can’t seem to focus on his schoolwork or control his temper. And lately, being away at boarding school is only getting worse-Percy could have sworn his pre-algebra teacher turned into a monster and tried to kill him. When Percy’s mom finds out, she knows it’s time that he knew the truth about where he came from, and that he go to the one place he’ll be safe. She sends Percy to Camp Half Blood, a summer camp for demigods (on Long Island), where he learns that the father he never knew is Poseidon, God of the Sea.

Soon a mystery unfolds and together with his friends — one a satyr and the other the demigod daughter of Athena — Percy sets out on a quest across the United States to reach the gates of the Underworld (located in a recording studio in Hollywood) and prevent a catastrophic war between the gods.

8. Keepers of the Lost Cities by Shannon Messenger

Join me at Foxfire Academy with my current read! I’m on Book 7 of this amazing series and I absolutely love it!

Amazon description: Twelve-year-old Sophie Foster has a secret. She is a Telepath, and has the unique ability to hear the thoughts of everyone around her – something that she’s never known how to explain, and has made her an outcast, even in her own family.

But everything changes the day she meets Fitz, a mysterious boy who appears out of nowhere and also reads minds. She discovers there’s somewhere she does belong, and staying where she is will put her in grave danger. In the blink of an eye, Sophie is forced to leave behind everything and start a new life in a world that is vastly different to her own.

Book 1 of 5 in the Upside-Down Magic series

This classroom is filled with magic gone awry! It sounds like the perfect school for me!

Nory, Elliott, Andres, and Bax are just four of the students in Dunwiddle Magic School’s Upside-Down Magic class. In their classroom, lessons are unconventional, students are unpredictable, and magic has a tendency to turn wonky at the worst possible moments. Because it’s always amazing, the trouble a little wonky magic can cause . . .

Book 1 of 7 in the Harry Potter Series

Most of you will probably be familiar with this one. Hogwarts will always be the ultimate magical boarding school!

Amazon description: Harry Potter has never even heard of Hogwarts when the letters start dropping on the doormat at number four, Privet Drive. Addressed in green ink on yellowish parchment with a purple seal, they are swiftly confiscated by his grisly aunt and uncle. Then, on Harry’s eleventh birthday, a great beetle-eyed giant of a man called Rubeus Hagrid bursts in with some astonishing news: Harry Potter is a wizard, and he has a place at Hogwarts School of Witchcraft and Wizardry. An incredible adventure is about to begin!