10 Books To Read During Middle-Grade March 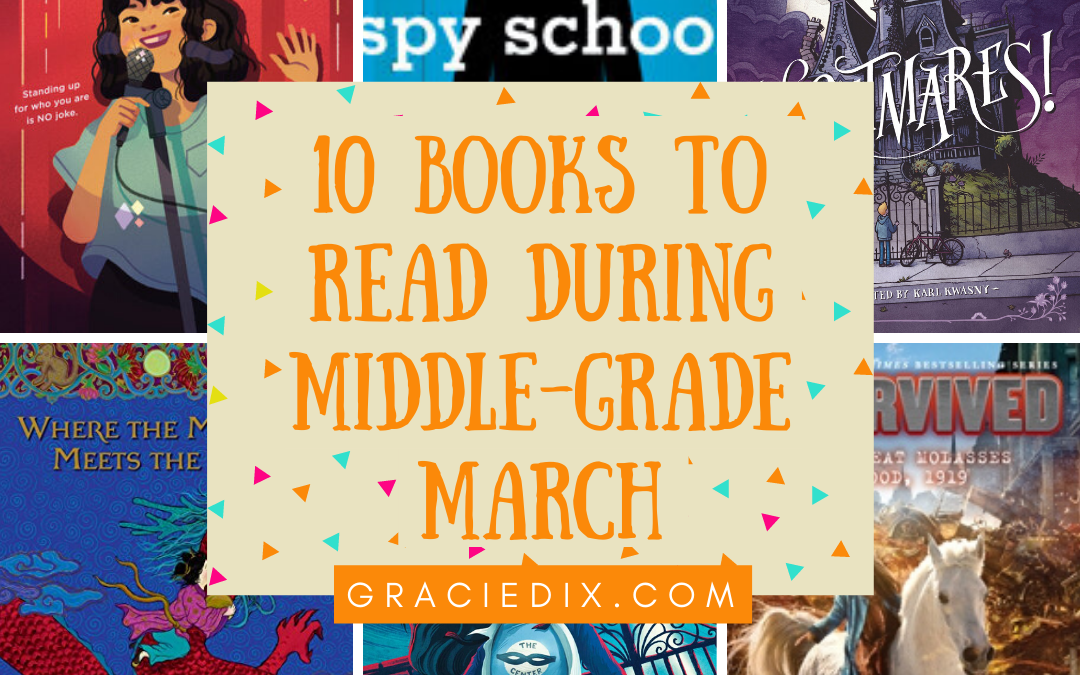 You may know that I’m new to Instagram, and I would LOVE for you to follow me there! @gracie.dix.author
I just discovered something on Instagram called Middle-Grade March, encouraging readers of all ages to read a middle-grade book (or ten!) in the month of March.

So… in honor of Middle-Grade March, here is a list of old favorites and new releases I think you will love! Let me know if you have a favorite I didn’t include and let me what you’re reading for Middle-Grade March.

Want more? Join me for Middle-Grade March on Instagram! I’ll be highlighting a recommended book every day, taking your suggestions, and hosting a giveaway of my upcoming book, Welcome To Superhero School!

Until then, happy reading!
Gracie

One lie snowballs into a full-blown double life in this irresistible story about an aspiring stand-up comedian. On the outside, Yumi Chung suffers from #shygirlproblems, a perm-gone-wrong, and kids calling her “Yu-MEAT” because she smells like her family’s Korean barbecue restaurant. On the inside, Yumi is ready for her Netflix stand-up special. Her notebook is filled with mortifying memories that she’s reworked into comedy gold. All she needs is a stage and courage. (On sale: 3/17/2020)

2. Book One in the Spy School Series: by Stuart Gibbs

Can an undercover nerd become a superstar agent? Ben Ripley sure hopes so—and his life may depend on it!

Ben Ripley may only be in middle school, but he’s already pegged his dream job: C.I.A. or bust. Unfortunately for him, his personality doesn’t exactly scream “secret agent.” In fact, Ben is so awkward, he can barely get to school and back without a mishap. Because of his innate nerdiness, Ben is not surprised when he is recruited for a magnet school with a focus on science—but he’s entirely shocked to discover that the school is actually a front for a junior C.I.A. academy. Could the C.I.A. really want him?

Actually, no. There’s been a case of mistaken identity—but that doesn’t stop Ben from trying to morph into a supercool undercover agent, the kind that always gets the girl. And through a series of hilarious misadventures, Ben realizes he might actually be a halfway decent spy…if he can survive all the attempts being made on his life!

3. Book One of the Nightmares! Series: by Jason Segel & Kirsten Miller

1. His dad married a woman he is sure moonlights as a witch.
2. He had to move into her purple mansion—the creepiest place in Cypress Creek.
3. He can’t remember the last time sleeping wasn’t a nightmarish prospect. Like even a nap.

What Charlie doesn’t know is that his problems are about to get a whole lot more real. Nightmares can ruin a good night’s sleep, but when they start slipping out of your dreams and into the waking world . . . well, that’s something only Charlie can face. And he’s going to need all the help he can get, or it might just be lights-out for Charlie Laird. For good.

4. Where The Mountain Meets The Moon: by Grace Lin

Minli’s father regales her with old folktales of the Jade Dragon and the Old Man in the Moon, Minli’s mother chides him for filling her head with stories. But inspired by these stories, Minli spends one of her precious copper pennies on a beautiful goldfish, which is said to be able to change the fortune of the owner. It pays off when the goldfish offers to show her the path to fortune and wealth! Minli is joined by a dragon who can’t fly, and together they set out to find the Old Man of the Moon who can fulfill their dreams…

5. Book One in the Spy School for Girls Series: by Beth McMullen

A girl discovers her boarding school is actually an elite spy-training program, and she must learn the skills of the trade in order to find her mother in this action-packed middle-grade debut that’s perfect for fans of Stu Gibbs.

After a botched escape plan from her boarding school, Abigail is stunned to discover the school is actually a cover for an elite spy ring called The Center, along with being training grounds for future spies. Even more shocking? Abigail’s mother is a top agent for The Center and she has gone MIA, with valuable information that many people would like to have—at any cost. Along with a former nemesis and charming boy from her grade, Abigail goes through a crash course in Spy Training 101, often with hilarious—and sometimes painful—results.

6. Book 19 in The I Survived Series: by Lauren Tarshis

One hundred years ago, a killer wave of molasses struck a crowded Boston neighborhood. Discover the story of this strange disaster in the next book in the New York Times bestselling I Survived series.

It’s been four years since Carmen and Papa moved from Italy to Boston. Life here is exciting, but not always easy. And then there’s the massive metal tank that rises up over their crowded North End neighborhood. The ugly tank, filled with sticky brown molasses, has always leaked. But nobody imagined that it could one day explode apart, sending a tsunami of molasses into the streets.
Caught in the flood, Carmen must fight for her life – the life that she and Papa built together in America. But where will she find the strength?

From the New York Times bestselling author Nic Stone comes a middle-grade road-trip story through American race relations past and present, perfect for Black History Month and for fans of Jacqueline Woodson and Jason Reynolds.

How to Go on an Unplanned Road Trip with Your Grandma:
Grab a Suitcase: Prepacked from the big spring break trip that got CANCELLED.
Fasten Your Seatbelt: G’ma’s never conventional, so this trip won’t be either.
Use the Green Book: G’ma’s most treasured possession. It holds history, memories, and most important, the way home.

What Not to Bring:
A Cell Phone: Avoid contact with Dad at all costs. Even when G’ma starts acting stranger than usual.

Set against the backdrop of the segregation history of the American South, take a trip with New York Times bestselling Nic Stone and an eleven-year-old boy who is about to discover that the world hasn’t always been a welcoming place for kids like him, and things aren’t always what they seem–his G’ma included. Real historical elements like the Green Book, the subject and namesake of the recent Oscar-winning film, make this an educational and powerful read.

When twelve-year-old Rory applies for a job at a spooky old mansion in his gloomy seaside town, he finds the owner, Lord Foxglove, odd and unpleasant. But he and his mom need the money, so he takes the job anyway. Rory soon finds out that his new boss is not just strange, he’s not even human—and he’s trying to steal the townspeople’s shadows. Together, Rory and his friend Isabella set out to uncover exactly what Foxglove and his otherworldly accomplices are planning and devise a strategy to defeat them. But can two kids defeat a group of ancient evil beings who are determined to take over the world?

9. Book 1 in the Young Samurai Series: by Chris Bradford

August 1611. Jack Fletcher is shipwrecked off the coast of Japan – his beloved father and the crew lie slaughtered by ninja pirates. Rescued by the legendary sword-master Masamoto Takeshi, Jack’s only hope is to become a samurai warrior. And so his training begins.

Cursed by the Key of Forgetting, Seth has lost all memory of his past—his relationships, his experiences, and who he really is. For now, he will align with his new mentor, Ronodin, the dark unicorn, who takes him to the Phantom Isle, the secret gateway to the Under Realm. Though Seth is not formally a prisoner, Ronodin wants to use him and his shadow charmer powers for his own dark ends.

Kendra is frantic to find her missing brother, but the quest will take her and her companions, including Warren, Tanu, and Vanessa, far from Wyrmroost to Crescent Lagoon—a recently fallen dragon sanctuary made up of many islands and underwater domains. Its caretaker has regained a foothold on one of the islands. If Kendra and her friends can save that sanctuary, they might uncover the answers they need to rescue Seth.

With each sanctuary the dragons overthrow, Celebrant, the Dragon King, comes closer to the dawn of a new Age of Dragons. With the forces of darkness on the march, can Kendra and her allies gather enough power to win the epic dragon war?

Have you read any of the middle-grade books on this list? Which ones would you add to it for Middle-Grade March?